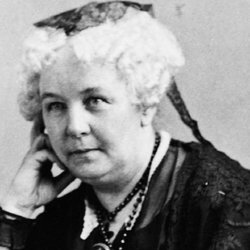 The history of mankind is a history of repeated injuries and usurpations on the part of man toward woman.

The prejudice against color, of which we hear so much, is no stronger than that against sex. It is produced by the same cause, and manifested very much in the same way. The negro's skin and the woman's sex are both prima facie evidence that they were intended to be in subjection to the white Saxon man.

The darkest page in history is the persecutions of woman.