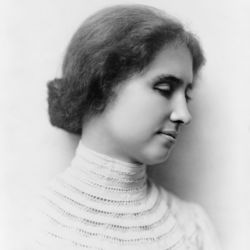 We differ, blind and seeing, one from another, not in our senses, but in the use we make of them, in the imagination and courage with which we seek wisdom beyond the senses.

Security is mostly a superstition. It does not exist in nature, nor do the children of men as a whole experience it. Avoiding danger is no safer in the long run than outright exposure. Life is either a daring adventure, or nothing.

The highest result of education is tolerance. Long ago men fought and died for their faith; but it took ages to teach them the other kind of courage, — the courage to recognize the faiths of their brethren and their rights of conscience. Tolerance is the first principle of community; it is the spirit which conserves the best that all men think.

The test of all beliefs is their practical effect in life. If it be true that optimism compels the world forward, and pessimism retards it, then it is dangerous to propagate a pessimistic philosophy.

Optimism is the faith that leads to achievement; nothing can be done without hope.

A happy life consists not in the absence, but in the mastery of hardships.

Our democracy is but a name. We vote? What does that mean? It means that we choose between two bodies of real, though not avowed, autocrats. We choose between Tweedledum and Tweedledee.

You ask for votes for women. What good can votes do when ten-elevenths of the land of Great Britain belongs to 200,000 and only one-eleventh to the rest of the 40,000,000? Have your men with their millions of votes freed themselves from this injustice?