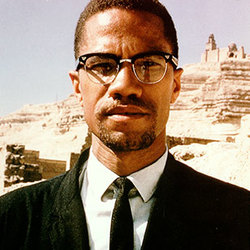 You get freedom by letting your enemy know that you'll do anything to get your freedom; then you'll get it. It's the only way you'll get it.

We didn't land on Plymouth Rock. The rock was landed on us.

Whether we are Christians or Muslims or nationalists or agnostics or atheists, we must first learn to forget our differences. If we have differences, let us differ in the closet; when we come out in front, let us not have anything to argue about until we get finished arguing with the man.

I don’t see any American dream; I see an American nightmare.

We want freedom now, but we’re not going to get it saying “We Shall Overcome.” We’ve got to fight until we overcome.

Today it’s time to stop singing and start swinging. You can’t sing up on freedom, but you can swing up on some freedom.

They call me "a teacher, a fomenter of violence." I would say point blank, "That is a lie. I'm not for wanton violence, I'm for justice."

I've had enough of someone else's propaganda. I'm for truth, no matter who tells it. I'm for justice, no matter who it's for or against. I'm a human being first and foremost, and as such I am for whoever and whatever benefits humanity as a whole.

Power never takes a back step — only in the face of more power.