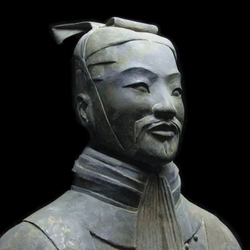 All men can see these tactics whereby I conquer, but what none can see is the strategy out of which victory is evolved.

Speed is the essence of war. Take advantage of the enemy's unpreparedness; travel by unexpected routes and strike him where he has taken no precautions.

To a surrounded enemy, you must leave a way of escape.